Andrea and I met in 2002 when we were teammates together on the Davidson Crew team.  I was two years behind her in school and looked up to her as a great leader and motivator.  Three years later, I followed in her footsteps and became the Dean Rusk Fellow for Davidson’s International Studies Program, a position for recent graduates that she had filled in 2003.  I devoured the notes and instructions she left behind for successive Fellows, and in this way she was once again influential in my life.

Now over twelve years after our first meeting, life has brought us back together. Andrea and I live less than five miles from each other. However, neither of us realized how near we lived to one another until I learned of her diagnosis and reached out to her and Dave. My husband Doug and I have been deeply inspired by Andrea’s story. When Andrea issued the 2015 Team Drea Challenge, we agreed to participate without hesitation. The only question was how?

Instead of choosing a single race, Doug and I finally decided that we would participate as a family in one race per month to raise money for the  Blazeman Foundation to find a cure for ALS and care for those fighting it.  At each event, one of us will race while the non-racer pushes Otto (2 ½) and Isabella (8 months) in the Bob jogger or offers spectator support.  Our goal is to raise $5,000 by the end of the year.  We are matching every dollar donated toward our race series, up to $2,500.  You can see our fundraising page and race plans here.

This past Saturday I ran the first of our 12-race series, the Miami Tropical 5K, which is the “warm-up race” for the Miami Marathon.

My journey to the starting line was filled with amusing obstacles that created less-than-ideal pre-race conditions.  First of all, our flight from DC was delayed.  With baby in tow and all of her paraphernalia, we stumbled in to our South Beach hotel close to midnight.  On the morning of the race, my cab got stuck in traffic because the roads were blocked and I ended up running along the highway to get to the start.  When I went to retrieve my race packet, the volunteers could not find my race bib and scrambled to assign a new number to me with less than ten minutes left until the gun went off.

Despite the frenzy, I showed up to the starting line with a smile, reminding myself of why I was running.  I was doing this race for Andrea.  The run represented my attempt to find a meaningful way to join her in her struggle against ALS, to do my small part in raising money to find a cure as she has challenged us all to do. 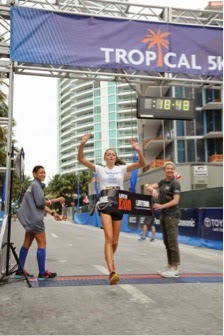 The gun went off, and as I huffed and puffed down the McArthur Causeway, past giant cruise ships in the Port of Miami, I embraced the pain of the race.  The first two miles went by quickly, but the last one was grueling.  My body was not used to Miami’s punishing heat and humidity. As I inched forward toward the end of the race at Nikki Beach, I felt like I was hitting a wall, but once I turned the corner and could see the finish line, I could hardly believe what the clock was telling me: that I would break 19 minutes, a personal barrier that I had not officially broken in almost six years.  But more exciting than achieving a personal goal was the press that Team Drea got as a result (here).

In the past, the imperfect circumstances leading up to the race would have thrown me off mentally, hindering my performance. However, I had one of my best races ever. I chalk it up to this: Andrea is inspiring me to live more fully in each moment, with passion and heart, remembering that we only have one shot at this life, and there is no time for small excuses to hold us back.

And her influence and motivation is carrying over into other more important areas of my life beyond racing.

I will conclude with one of my favorite Brian Andreas quotes, which reminds me of her: 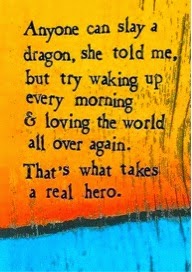 Thank you, Andrea, for your inspiration.  You are a real hero to our family, and we are proud to be members of Team Drea.