Clarity & Challenges
Well, once again, your emails, phone calls, text messages, Skype sessions, cards, letters, gifts, visits, and ice bucket challenges have been nothing short of incredible and humbling.  And once again, I feel totally guilty for falling behind on correspondence. Please know I’m grateful for all your support…it just takes me so much longer to do anything these days and, well, there’s a lot to do.

I’ll skip most of the saga, but while trying hard to be patient all summer, I kept getting these weird comments from my neurologist’s office suggesting that my May visit might not have been as ambiguous as I came away understanding.  Phrases like “probable ALS” and questions about wills and ventilators eventually freaked me out enough that I asked the neurologist to see me again and more clearly explain my status.

So in late August, she repeated the EMG.  There wasn’t anything remarkably different, which she said she expected, so we tried to ask more direct questions.  It turns out that if there is any lower motor neuron involvement, it’s not PLS.  So that possibility was actually out the window in May and we didn’t realize it.  I’m not sure how could there have been such a massive breakdown in communication…but there was.

So my diagnosis is currently “probable ALS.”  “Definite ALS” requires lower motor neuron abnormalities in three regions (arms, legs, stomach, back, face, etc), I have abnormalities in two.  But when we pressed whether it could be anything else besides ALS, she said no.

I can’t fully explain my immediate reaction to the news.  It certainly wasn’t relief at the diagnosis, but something like relief to finally get an answer after 11 months on the stress roller coaster of doctors, appointments, tests, medical records, insurance, theories that didn’t pan out, transferring records, new doctors, new tests, new theories.

It meant that I could finally get past the fear-induced paralysis of not knowing and focus on living because I knew.  I could stop dreading the worst news because I had it, but when I walked (walked!) out of the hospital, the sun was still shining and I could eat (eat!) pizza and talk (talk!) with my husband and parents.

As reality has set in, there have been MANY breakdowns, tantrums, tears, mind-numbing distractions, and pretty much every depressing thought you can imagine.  On a bad day, I’m nothing like the optimistic tone that’s typically in my blog.  But after the wave passes, I can usually get back to a sense of peace, gratitude for today, and — above all — a clear perspective on my life priorities.  Actually, the fact that I could have had that same news four months ago if only we’d understood her correctly just underscores that I don’t have any more time to waste in this life.  I wasted the summer worrying and the news came anyway.

In a wonderfully-timed blog post, Mark Manson asks, “If you knew you were going to die one year from today, what would you do and how would you want to be remembered?”

For most everyone else, this is an abstract question and it’s the last one so most readers probably don’t even get that far (or by then they realize they better get back to work).  For me, it’s something I’ve been thinking about a lot, even as we all pray I have much longer than a year to live.

My life priorities?  Beyond spending as much quality time as possible with family and friends and supporting them as best I can, this is it:  To be of service.  All my life I have looked for ways to help the people, organizations, and places I’ve been involved with.  To look around, see the needs, and try to make a positive difference.  Sustainability makes sense as a career choice because, well, the world needs it.

Which leads to Team Drea’s new challenge….and a reminder that everything happens for a reason:

Growing up, my main extracurricular activity was playing french horn. I started in 4th grade and by middle school, I was actually pretty good.  In 7th grade, my ever-supportive parents bought me a brand new Holton Farkas french horn, model 179.  That year, I surprised everyone (most of all me!) by coming in second in the all-state band competition.  My score was 179 out of 200.

Since then, 179 has been my lucky number.  I see it often like a friendly little omen on license plates, random signs, prices at the store, flight numbers, etc.  I use it for lottery tickets, screen names, and once as my bib number at PeasantMan because we got to choose (thanks Tuan!).
With ALS looming as a real possibility in August, I started googling around for “triathlon” and “ALS,” looking for a race that benefitted an ALS charity or, begrudgingly, a race that would accommodate disabled/challenged athletes.  I came across a video of a woman training for the Kona world championships and fundraising for ALS.  She had a bunch of tattoos, including an Ironman M-dot logo with “179” beneath it.  That story led me to the Blazeman Foundation and I froze, staring at 179 bibs everywhere on the page.
Jon Blais became an Ironman in 2005, five months after being diagnosed with ALS at the age of 33 (the same age I am now).  NBC covered his unbelievable journey to Kona – PLEASE watch the 11-minute video here, you will not regret it.  His bib number?  179.
I have watched the video countless times.  I watched it before my last neurologist appointment and afterwards that evening.  I cannot decide which is more awe inspiring – the drive it took to train for and get through Kona as his body failed him (an Ironman consists of a 2.4-mile swim, 112-mile bike, and a 26.2-mile marathon in under 17 hours), the strength it took to accept the likely inevitable outcome and commit himself to advance ALS research with the time he had left (even knowing it probably wouldn’t save him), or the courage it took to share his story so openly with the world.  Jon’s perspective changed my attitude towards the disease…and fit right into my recently clarified life priority to help those in need, to make a positive contribution to the world.
Since Jon’s amazing feat, the World Triathlon Corporation (WTC) retired bib #179 except for those raising money for ALS.  Top pros like Chrissie Wellington, Leanda Cave, Andy Potts, Mirinda Carfrae (and others) have supported the cause, as have weekend warriors touched by Jon’s story or an ALS diagnosis in someone they love.  I had no clue when I raced with it last year.
DP and I have been privileged to talk with Jon’s parents and learned even more about his life and sacrifice.  Jon set up the Blazeman Foundation himself before his death less than two years after Kona because he wanted to declare war on ALS.  Not palliative care or new technologies to help those suffering – war to do the research to defeat it, wipe it out once and for all.  He worked with Bob “Vigo” Vigorito, a six-time Ironman finisher and 20+ year director of the TriColumbia triathlon who happens to be a neural scientist to create a tissue acquisition project at the University of Maryland to study ALS through the deceased.  Vigo did the work on Jon’s body himself, as they had planned.
So now, I invite you to join me in continuing Jon’s legacy and helping me to make my own lasting contribution to the world. I am signed up for the Ramblin’ Rose triathlon in Chapel Hill, NC on October 5th and will use it as a fundraiser for the Blazeman Foundation. 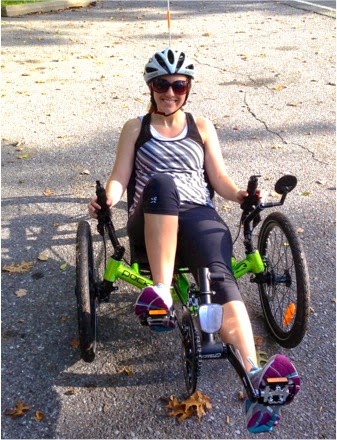 Since I can’t ride my bike, we splurged on a Catrike Pocket recumbent trike, which thanks to the efforts of Kyle Bryant and others, are allowed in USAT triathlons as of this year. I thought it would be sad or dorky, but I love it.  Kind of like my own real-life Super Mario Kart (and no worries about forgetting to unclip, win!).

Even though it’s only an 11-mile super sprint and nowhere near the 70.3-mile half Ironman-distance race I did last September, this race will be a major challenge for me.  Especially since I wasted the summer worrying and not training.  And since I messed up my shoulder in a fall recently and can’t swim at the moment.  But no race anxiety this time — I will go out and just have fun with my dear friends who are racing with me and be grateful for whatever I can do that day.  Really, I feel bad for anyone racing who’s stressing about coming in last…don’t worry honey, I’ll claim that spot gladly 🙂

I shared my diagnosis with a triathlon Facebook group I’m part of (sometimes it’s just easier to talk in a semi-anonymous setting) and I was overwhelmed with the deluge of kindness from strangers.  They started a #Team179 hashtag and several people said they were racing in my honor this season and wrote #179 in sharpie on their shorts, shirts, swim caps, or themselves.

Clearly, Team Drea has a new mission.  If you wish to contribute to the Blazeman Foundation as part of Team Drea, please visit my page.  The tagline — Jon’s tagline — couldn’t be more fitting: “So Others May Live.”

We are also planning to participate in the 3-mile Walk to Defeat ALS in Washington, DC on November 1st.  If you would like to participate, please contact me or leave a note in the comments.  We’ll make it a party!

If you have other fundraising ideas, let me know.  I would love to work with you to make it happen.

I finally worked up enough courage to finish reading Darcy Wakefield’s I Remember Running: The Year I Got Everything I Ever Wanted – and ALS.  Darcy was also diagnosed at 33 and in the same year (2005), met her partner, bought a house, and had a baby.  The details are different, of course, but I found myself nodding along with her observations and experiences with the disease — so much so that if I ever wrote a book, I would probably be accused of plagiarism.  But the quote that I find myself remembering most often is from the book review, which says:

“As time and the disease progress…[she] seems wiser, braver and more alive than ever.”

I’ll strive for that. 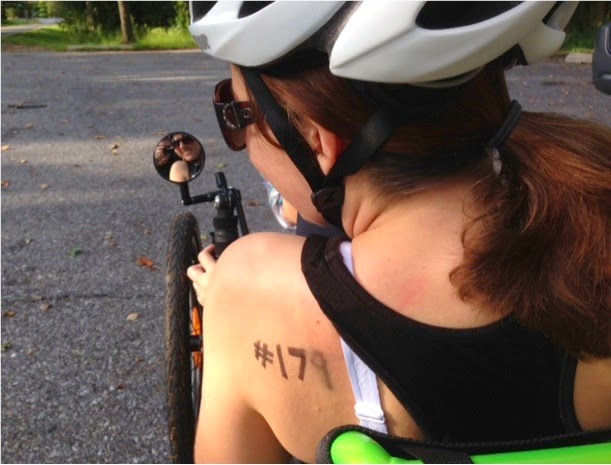